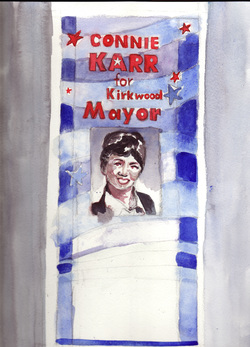 Elegy to Connie is a feature-length animated documentary that examines
the events prior to and after the 2008 shootings at Kirkwood City Hall.
As retold by a group of grassroots community builders who were close
with the late councilwoman Connie Karr, the film was made partially
in collaboration with these women and is based on their stories.  Addressing issues of
citizen representation, white privilege, disenfranchised neighborhoods, alienation, and healing after tragedy, this film illustrates the complicated nature of the events before and after the shooting.  Finally the story celebrates Connie's legacy as a leader.

This project is supported in part by awards from the University City CALOP commission, the Mid-America Arts Alliance, the National Endowment for the Arts, Missouri Arts Council, and foundations, corporations and individuals throughout Arkansas, Kansas, Missouri, Nebraska, Oklahoma, and Texas.
Additional funding has been made possible by grants from the Regional Arts Commission, and Critical Mass for the Arts, St. Louis.
Powered by